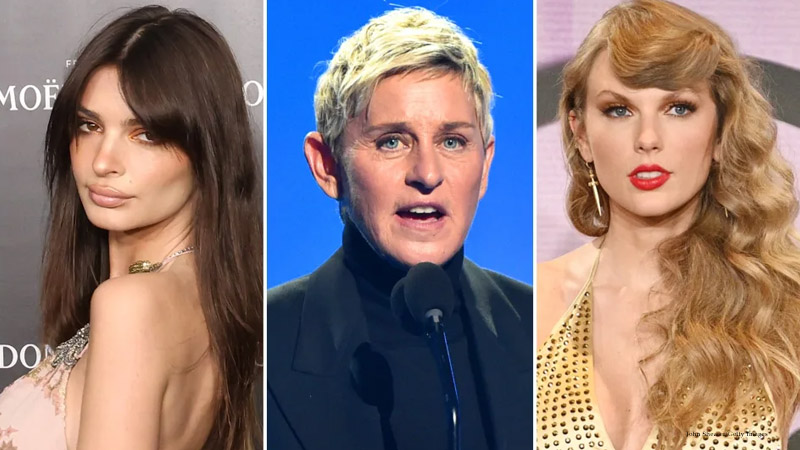 Emily Ratajkowski, a model and actress, has pulled American TV celebrity Ellen DeGeneres back into the spotlight for her questionable interviewing abilities on her now-canceled daytime show, The Ellen Show.

Ratajkowski, also known as Emrata, replied to a TikTok video in which the TV megastar was interviewing music sensation Taylor Swift while the latter was just getting started in her career. The We Are Your Friends actor defended the Reputation singer in the comments section, criticizing the reporter.

TikTok @thatnostalgicgirl created the video, which combines two Taylor Swift videos. One came from a 2019 interview with Apple Beats’ Zane Lowe, while the other was from a 2012 appearance on Ellen DeGeneres’ show. It caught Emily Ratajkowski’s eye, making her comment on it, wherein she wrote:

“This is so f**ked up. She’s literally begging her to stop.”

Swift seemed to be talking about her experience on The Ellen Show with Zane Lowe, according to TikTok. She said to Lowe in the first tape that older interviews made her uncomfortable and that, at 23, she was limited to who she dated.

“People were just like… kind of reducing me to… kind of making slideshows of my dating life and putting people in there that I had sat next to at a party once. They were deciding that my songwriting was a trick, rather than a skill and a craft.”

She went on to say that this was a trick people used to minimize women’s abilities and achievements and not give them proper credit.

DeGeneres was seen torturing the All Too Well singer in the 2012 clip by showing a slideshow of her with a variety of men. Swift was teased and prodded by the former to reveal who she dated and which song on her new album was about the man.

Despite Swift’s concerns, DeGeneres persisted and even offered her a bell to ring if a potential muse’s face appeared on the screen.

The Lavender Haze singer, as young as she was, did not hold back from protests. She said, repeatedly:

“Stop it, stop it, stop! This makes me feel so bad about myself. Every time I come up here, you put a different dude up there on the screen, and it just makes me really question what I stand for as a human being.”

Emily Ratajkowski was apparently enraged by the video and Swift’s constant request to DeGeneres to stop, which prompted her to respond. The abovementioned TikTok video is filled with similar comments, highlighting the alleged poisonous character of the 64-year-old media celebrity.

This comes after her beloved show was canceled owing to reports of a massively poisonous work environment, which DeGeneres denied and called “coordinated.”