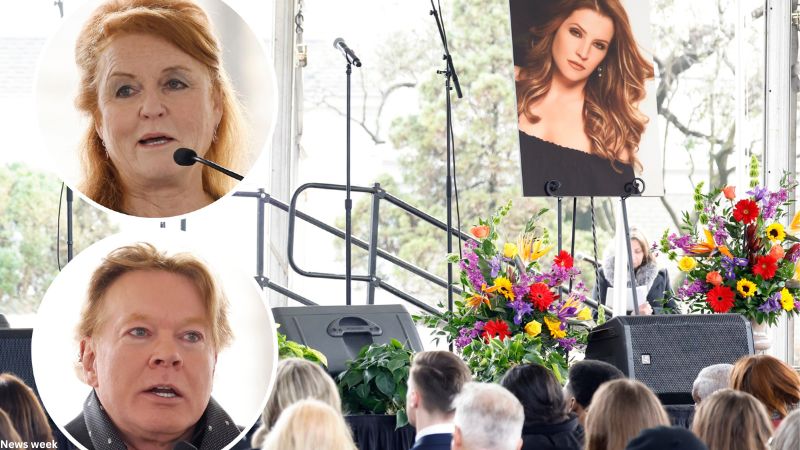 After a memorial service, the singer will be put to rest on Jan. 22 in the famous Memphis house she inherited from her late father, King of Rock and Roll Elvis Presley. Lisa Marie’s friends Sarah Ferguson, Sarah, Duchess of York, Alanis Morissette, Smashing Pumpkins leader Billy Corgan, and Guns N’ Roses singer Axl Rose were among those who came to pay their respects on the property’s front lawn.

“I feel like I’m supposed to be texting her like, right now, saying ‘I’m here,’ telling her how wonderful everyone is,” Axl said in a speech. “I never in a million years imagined singing here and especially under these circumstances.”

The rocker added, “Lisa is loved and missed by many and will continue to be loved by all those whose lives she touched.”

He then sat at a piano and performed Guns N’ Roses’ power ballad “November Rain.”

In her touching speech, Sarah spoke directly to the crowd. “I stand here with great honor,” she said, “because we called each other ‘Sissy.’

The duchess also quoted comments the late Queen Elizabeth II made in a statement read at a New York City church service after the Sept. 11, 2001 attacks. “My late mother-in-law said, ‘Nothing that can be said can begin to take away the anguish and the pain of these moments. Grief is the price we pay for love,'” Sarah said at the funeral. “How right she was.”

Thousands of fans, many of whom were carrying little children, came to Graceland to pay their respects. Mourners’ flowers adorned the entrance to the popular tourist destination.

Lisa Marie died in Los Angeles on January 12 at the age of 54 after being brought to a hospital, however, no official cause of death has been released.

Lisa Marie will be buried next to her son Benjamin Keough, who committed suicide at the age of 27 in 2020, according to a representative for the singer’s daughter, Riley Keough, who told E! News last week. Elvis Presley, who died in 1977 at the age of 42, is also buried at Graceland.

Lisa Marie, 33, is survived by her twin children Harper and Finley, 14, as well as her mother Priscilla Presley, 77, who also spoke at the memorial.

Lisa Marie passed just two days after she and her mother attended the 2023 Golden Globes, where Austin Butler won Best Actor in a Motion Picture, Drama for his performance as Elvis in Baz Luhrmann’s 2022 film Elvis.

The actor, who met Lisa Marie last year, was spotted arriving at the funeral with his girlfriend Kaia Gerber.

Following Lisa Marie’s death, he said in a statement, “My heart is completely shattered for Riley, Finley, Harper, and Priscilla at the tragic and unexpected loss of Lisa Marie. I am eternally grateful for the time I was lucky enough to be near her bright light and will forever cherish the quiet moments we shared. Her warmth, her love, and her authenticity will always be remembered.”