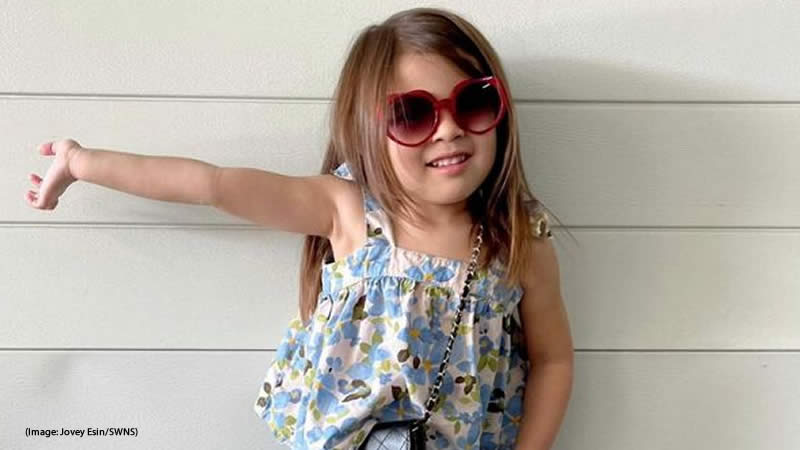 A four-year-old has amassed over 42,000 subscribers on social media by hosting live streams and having her mother take trendy photos of her. Paris McKenzie is obsessed with picking up her mother’s camera and sharing her daily life with her fans, and she has already become internet famous.

She enjoys vlogging and has her parents take photos of her in her outfits, which she then uploads to the YouTube channel she shares with her mother, Jovey Esin, 30.

The pair collaborate to create content, and Paris even has her own camera, although a toy that does not take real pictures.

“She loves the camera,” Jovey, a video creator from Brisbane, Australia, said. She’ll say, ‘Mum, can you take a picture of me with this background?’ After I’ve taken them, she’ll want to look at them to make sure her pose is correct.

“When she grows up, she wants to continue vlogging.” Our subscribers all adore Paris. She enjoys talking because she is a social butterfly. She is constantly requesting me to vlog.

“I’m sure there will be videos of her talking on my phone if I leave her with it for five minutes.”

When Paris was one, Jovey started a YouTube channel to document their lives and share them with family in the Philippines.

However, their channel grew in popularity, and Paris became interested in vlogging as she grew older.

“She grew up seeing the camera, and now she smiles at it whenever it’s out,” Jovey explained.

Paris now does her own live streams and films clips of her daily life on her mother’s phone.

“She knows how to turn the camera on, and if she’s not vlogging with my phone, she’ll be vlogging with her toy camera,” Jovey explained.

“She enjoys just talking about everything she did that day.” She enjoys dressing up and flaunting her outfits.

“She also enjoys art and recording herself singing.” She currently vlogs on my phone or camera, but we are considering getting her a camera for her next birthday.”

Michael McKenzie, 40, Jovey’s partner who works in a bank’s fraud department, is a fan of the channel and Paris’ love of vlogging.

“I think she’ll end up taking over the channel as she gets older,” Jovey predicted. “She’s completely obsessed.”

Tiffany Trump Devastated By Hurricane Nicole Threatens Wedding At Mar-A-Lago: “Everyone is stuck inside.”