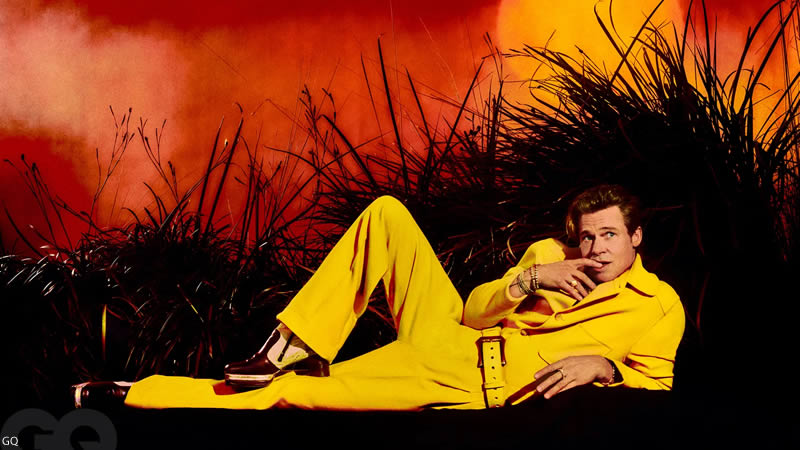 The actor from Once Upon a Time in Hollywood is in a new reckoning.

One of the most well-known actors in the world, Brad Pitt has chosen to keep his challenges and personal life largely secret. But in an unusual move, the actor became more forthcoming in a fresh interview.

The actor spoke up about his life’s philosophy, profession, and health while gracing GQ’s global cover for the months of July and August.

He appeared on the cover photos wearing just a plain button-down shirt and jeans, accessorized with chains and rings, and he nearly had an otherworldly appearance.

As per Hellomagazine, in contrast to his prior appearance, Brad was lying in a pool of water with his hair pulled back and fully clean-shaven. He was staring into the camera with his captivating and slightly eerie piercing blue eyes.

In the interview, the celebrity was frank and talked openly about the health adjustments he made following his 2016 divorce from Angelina Jolie.

He stopped drinking after the breakup and has been abstinent for around six years at this point. He also discussed his year and a half of attendance at Alcoholics Anonymous and the particular stress it brought him.

“I had a really cool men’s group here that was really private and selective, so it was safe,” he revealed. “Because I’d seen things of other people who had been recorded while they were spilling their guts, and that’s just atrocious to me.”

As he chewed on a nicotine mint, he even mentioned how difficult it had been to stop smoking during the pandemic because he couldn’t progressively drop his count.

“I don’t have that ability to do just one or two a day,” Brad said. “It’s not in my makeup. I’m all in. And I’m going to drive into the ground. I’ve lost my privileges.”

While also gushing about his latest projects, he also explained his thoughts on loneliness and feelings of the same, saying: “I always felt very alone in my life, alone growing up as a kid, alone even out here, and it’s really not till recently that I have had a greater embrace of my friends and family.

“What’s that line, it was either Rilke or Einstein, believe it or not, but it was something about when you can walk with the paradox, when you carry real pain and real joy simultaneously, this is maturity, this is growth.”

Continue Reading
You may also like...
Related Topics:Brad Pitt