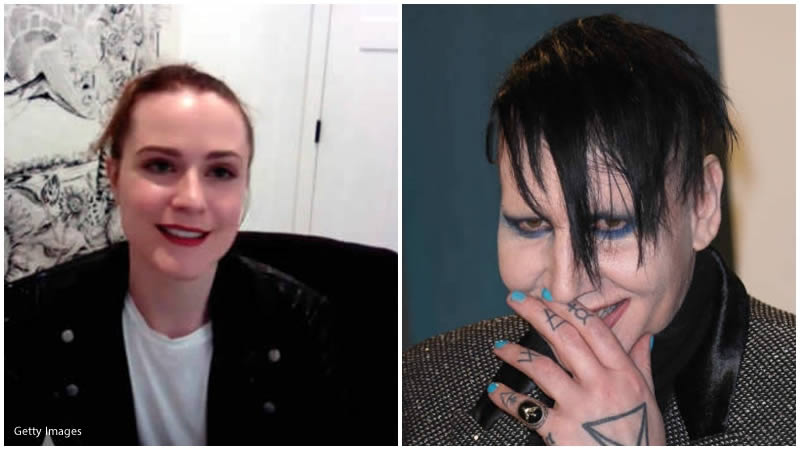 In the second part of a new documentary premiering Wednesday on HBO (9 EDT/PDT), Evan Rachel Wood recounted more terrifying and horrific details of her relationship with ex-fiancé Brian Warner (aka Marilyn Manson).

The actress and activist claim that Manson forced her to drink his blood, beat her with a swastika-adorned Nazi whip and shocked her private parts in “Phoenix Rising – Part II: Stand Up” (both parts are available to stream Tuesday on HBO Max).

It follows the Sundance Film Festival’s premiere of “Phoenix Rising – Part I: Don’t Fall” earlier this year. Wood, 34, revealed the start of her toxic and turbulent relationship with Manson, 53, and how she’s reclaiming the narrative in Part I.

For years, the “Westworld” actress kept her claimed abuser’s identity hidden, but in February 2021, she named Manson, who refuted the allegations, in an Instagram post. Since then, a number of women have accused Manson of physical and sexual abuse, and he has been the subject of several lawsuits.

Manson has since filed a suit against Wood in Los Angeles Superior Court, claiming defamation, emotional anguish, and “impersonation over the internet.” He also filed a lawsuit against her friend, artist Illma Gore, alleging that they both forged an FBI investigation letter.

“There will come a time when I can share more about the events of the past year. Until then, I’m going to let the facts speak for themselves,” Manson tweeted earlier this month, linking to the lawsuit.

Filmmakers contacted Manson but he did not respond to specific allegations. Instead, the film includes a statement from his lawyers, which says the musician “vehemently denies any and all claims of sexual assault or abuse of anyone” and described the claims as “part of a coordinated attack by former partners and associates of Mr. Warner who have weaponized the otherwise mundane details of his personal life and their consensual relationships into fabricated horror stories.”

Manson’s attorney Howard King also told USA TODAY: “As we detailed in our lawsuit, nothing that Evan Rachel Wood, Illma Gore, or their hand-picked co-conspirators have said on this matter can be trusted. This is just more of the same.
But, then again, what else would you expect from a group who have spread falsehood after falsehood about Brian and even went as far as to forge an FBI letter to further their phony claims?”

Part II of the documentary debuts in September 2020, with Dan Cleary, one of Manson’s former assistants, publicly supporting Wood on Twitter. Manson had not yet been named as Wood’s alleged abuser.

“He broke her. I didn’t totally realize until later in life,” Cleary wrote at the time. He added: “But as I see so many people defending him and calling his accusers liars, I’ve just had enough. Believe them, I saw it.” Fast-forward to October 2020, and Wood and Cleary get to embrace in person. Wood then meets former girlfriends of Manson, where they all commiserate about their alleged abuser.

Manson allegedly hacked into Wood’s emails, and Cleary confirms that Manson gathered data on those who used his Wi-Fi.

Starting in mid-2006, when she was 18, Manson and Wood were together on and off for four and a half years. He was 37 years old at the time.

Manson can be heard screaming that Wood answer him or else in a chilling 2008 home video. “I’ll kill you.”

Wood claims Manson deprived her of sleep and that she suspected him of putting meth in the prescription medicines she was taking. She alleges she threw up every day and couldn’t get out of bed, and that he raped her while she was sleeping.

She moved to her father’s residence in North Carolina in 2009. Manson, on the other hand, enticed her back to Los Angeles after threatening her to kill himself. She was failed in getting a restraining order against him because she believed it would only irritate him more.

He reportedly hit her with a Nazi whip from the Holocaust, shocking her private parts, she claims. He forced her to drink his blood and drank hers as well.

Manson allegedly refused from using birth control and refused to wear a condom. She found out she was pregnant when she left to film “Mildred Pierce” in 2011. Wood made the choice to get an abortion.

“I obviously believe in a woman’s right to choose, but that doesn’t mean that it wasn’t devastating,” Wood says.

She began feeling suicidal after the abortion and tried to kill herself, then later entered a mental health facility. “When I got there, I could sleep because he didn’t know where I was,” Wood says.

Later, Wood became more emphatic in his opposition to Manson, and he prepared to end the relationship. She didn’t see Manson for years after leaving to film “The Ides of March” in 2011, officially ending their relationship. She quickly fell in love with actor Jamie Bell, despite the fact that she was not aware of the work she needed to do to process the pain she had internalized.

She and Bell married in 2013 and had a son together, but they have since split. Wood and her son are shown celebrating Hanukkah together and sharing other tender moments, such as when his tooth fell out, in the documentary.

After authorities began investigating Manson, she briefly fled to an undisclosed place. Despite the fact that she had not publicly named him, she was receiving death threats from his fans.

Despite this, Wood gave the FBI a statement regarding Manson, and by February 2021, she was ready to tell her story publicly.

“I was brainwashed and manipulated into submission,” Wood wrote in an Instagram post at the time. “I am done living in fear of retaliation, slander, or blackmail. I am here to expose this dangerous man and call out the many industries that have enabled him before he ruins any more lives. I stand with the many victims who will no longer be silent.”