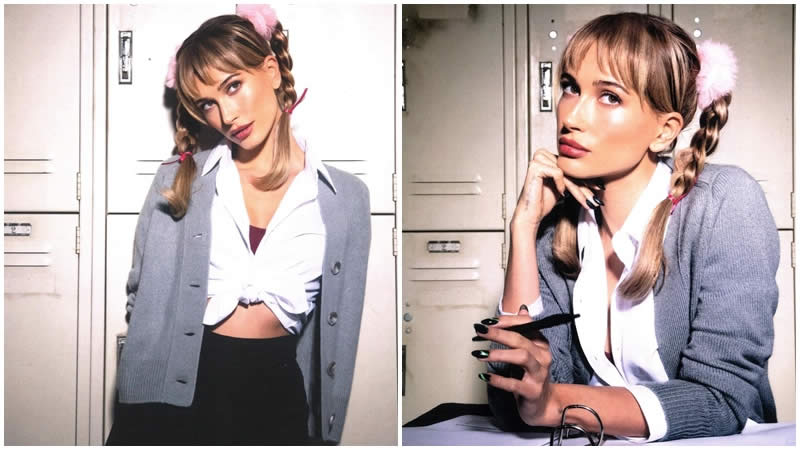 It’s time to celebrate the spookiest holiday of the year: Halloween night! Where celebrities are dressed to the nines for their perfect trick-or-treating night, rock star Justin Bieber’s wife, supermodel Hailey, dressed up as legendary singer Britney Spears for the occasion.

The 24-year-old model not only recreated one, but four of the ‘Toxic’ singer’s iconic looks. She also noted in the caption that she is still shocked by her experience at Britney’s concert.

“Happy Halloweekend, the first concert I ever went to was the queen @britneyspears and I’ve been shaking ever since,” Hailey wrote, paying homage to the iconic star.

Britney’s most iconic look, her Catholic schoolgirl outfit from her debut music video, is featured in the first look”…Baby One More Time” era which comprised of a cropped white button-down, a grey cardigan, and a pleated miniskirt, while her hair was styled in braided pigtails with pink pompom scrunchies.

For her next look, Hailey dressed up like Britney’s red latex jumpsuit from the music video “Oops!… I Did It Again.” The third was her well-known 1999 Rolling Stone cover shoot, and finally, the fourth reminded social media users of the singer’s sultry costume from her “I’m a Slave 4 U” music video.

Within a few hours of being posted, the post had received over 2 million likes. Hailey’s fans and famous friends praised her costumes in the comments of the post. “She said ALL the looks!!!” Vanessa Hudgens wrote. Kylie Jenner reacted with a slew of heart-eye emojis.

Elsa Hosk added, “Yessss Killed!!!” Everyone can agree that Hailey understood the assignment. Britney Spears is one of the most iconic celebrities of all time.

Her popularity increased even more during the recent #FreeBritney movement, in which she received massive support for her battle to end her 13-year conservatorship, which was led by her father, Jamie Spears.