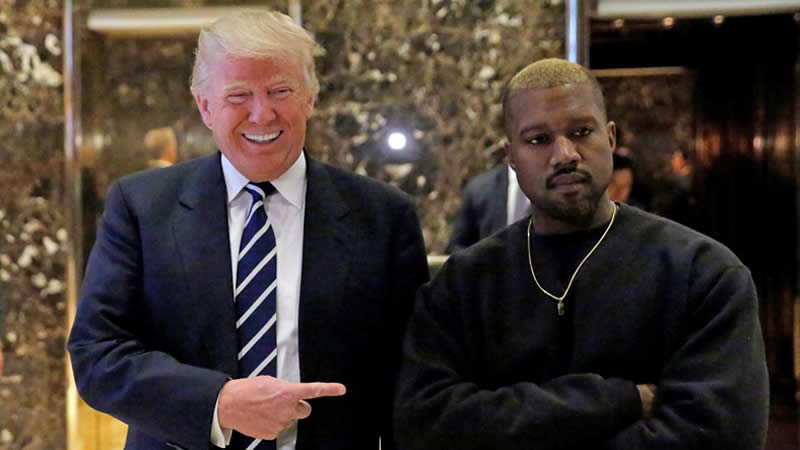 The billionaire musician and entrepreneur, known as “Ye”, sat down for a freewheeling conversation on the Drink Champs podcast late Thursday night.

Late Thursday night, musician and entrepreneur Kanye West—or “Ye,” as he prefers to be called now—joined rapper Noreaga and DJ EFN on Drink Champs, a podcast that also airs on Diddy’s Revolt, for his first conversation since his split from wife Kim Kardashian.

West appeared to be in excellent spirits, sparking up a joint and sipping Hennessy and Hibiki. When asked whether he’d ever appeared on Verzuz, he joked, “Oh, absolutely—but I would need about like four people to go against me at one time.” And, when pressed on whether he’d knock out Drake on Verzuz, he cracked, “I’m winning every situation.”
As far as his ongoing beef with Drake goes, West described how “Drake doesn’t do an outright diss song… he’s going to set it up like war.”

Later, West stated that he confronted Drake over some of his raps about his then-wife Kardashian in which Drizzy implied that he’d slept with her on a group text that included Drake, Kid Cudi, Pusha T, Jay-Z, Kardashian, and Travis Scott.

“One of the lines I said that was a legend was, ‘I’m worth more than all of y’all on this text combined,’” West recalled messaging. Then, he said that he confronted Drake via the group text, sharing, “I had this conversation with Drake that’s like, ‘I never fucked Kim,’ but I was like, ‘But you acted as you did… Did you ever DM her? Everything else around it—you know, ’cause it ain’t about just the actual act of it.”

West has recently been under fire for promoting Marilyn Manson and DaBaby, hosting a Donda album listening party in Chicago, and inviting Manson to “worship” with him at a recent Sunday Service event.

“All the #Me Too—like, when I sit next to Marilyn Manson and DaBaby, right after both of them got canceled, for five songs, you know, it’s like they can’t cancel a song,” said West. “They’ll hit you with the accusations or somebody who you was with 10 years ago. And also, there are women who’ve been through very serious things, pulled in alleys against their will—that’s different than a hug, but it’s classified as the same thing. It’s power and politics. You know, power-hungry maniacs and just control. This is 1984 mind-control we’re in.” (Marilyn Manson, for the record, is facing four lawsuits for sexual assault, has been accused of a horrendous cycle of abuse by the actresses Evan Rachel Wood and Esme Bianco, and is under investigation by the Los Angeles County Sheriff’s Department.)

“They’ll hit you with the accusations or somebody who you was with ten years ago.”

There was a lot more, of course, including West claiming he was “shadow banned” on Twitter during his brief presidential run, despite Jack Dorsey’s personal assurances that he was not; that he’s “bought 1,200 living sheep,” making him some sort of literal shepherd; that he’s worth $9 billion; that walking around with his new haircut is “harder than wearing a Trump hat”; he pushed the bizarre right-wing lie that Margaret Sanger pushed birth control in order to limit the Black population (in reality, she worked closely with Black community leaders and was praised by Martin Luther King Jr. and his wife, Coretta); came out against abortion (again); claimed Shakespeare “created 30 percent of our language” (?); and revealed how he’s still not technically divorced from Kardashian, offering, “She’s still my wife—it ain’t no paperwork,” adding that if he had his way they’d still be together.

The Drink Champs co-hosts Noreaga and DJ EFN, who refused to ask any follow-up questions and generally came across as possessed sycophants (at one point, Noreaga even told West that he would’ve voted for him for president), were far more embarrassing than West’s constant name-dropping and sloppy knowledge of history. Maybe it’s time for West to sit down for a real interview?