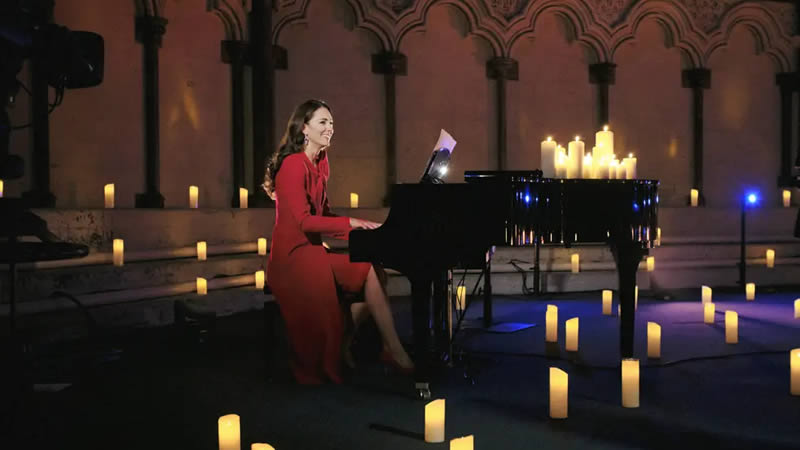 In a surprise moment during the Friday broadcast of the “Royal Carols: Together at Christmas” carol concert — spearheaded and hosted by Middleton and supported by The Royal Foundation — the Duchess of Cambridge, 39, joined Tom Walker for a performance of his song, “For Those Who Can’t Be Here.”

Middleton’s work with the Brit Award winner was described as a “once-in-a-lifetime collaboration” by the winner.
“I thought she absolutely smashed the performance; it’s not easy to just jump behind a piano with a bunch of musicians you’ve never played with before and record live takes to the camera, but she completely nailed it,” Walker said, according to People.

He continued, “It was a crazy pinch-yourself kind of day for me, to be in such a beautiful venue playing alongside the Duchess with my band and a string quartet. I certainly won’t forget that in a hurry! My mum had a total freak-out when she saw it on the telly.”

Middleton was described as a “lovely, kind, and warm-hearted” person by Walker, who added that Prince William’s wife personally thanked everyone for the opportunity to play together.

After meeting the 30-year-old singer at a Forward Trust event in October, Middleton contacted Walker with the idea of collaborating on performance, according to a royal insider. She had heard him sing “Leave a Light On,” a song on the struggles of those experiencing addiction, at the time.

Middleton requested that Walker play his holiday song “For Those Who Can’t Be Here” during the carol service because it had “such pertinence for so many this year” and “struck a chord” with the duchess herself, according to the unnamed insider.

The Duchess of Cambridge, who learned to play the piano as a child and took “great comfort” in music throughout the pandemic, then offered to accompany him on the piano, the source added.

“Music was very important to the Duchess during the lockdowns,” the source was quoted as saying. “She also recognizes the powerful way in which music brings people together — especially during difficult times. For these reasons, she was keen to be part of Tom’s performance in this way.”

Middleton and Walker had practiced the song together in London and then recorded it in “a couple of takes,” according to the insider.

After that, Middleton and Walker performed at Westminster Abbey’s Chapter House for the Christmas carol service on December 8, which was aired on ITV and ITV Hub on Christmas Eve. The event honored the efforts of people and organizations from around the United Kingdom who have helped their communities deal with the COVID-19 pandemic.

Walker said he believes that the song “will resonate with a lot of people this Christmas,” adding that his “heart goes out to anyone raising a glass around the table remembering those who can’t be with us.”

In addition to Walker and Middleton’s duet, Ellie Goulding sang a rendition of “Have Yourself a Merry Little Christmas,” while “Bleeding Love” hitmaker Leona Lewis performed “O Holy Night.” Prince William also delivered a reading from Luke 2:1-7 during the service.

Continue Reading
You may also like...
Related Topics:Kate Middleton