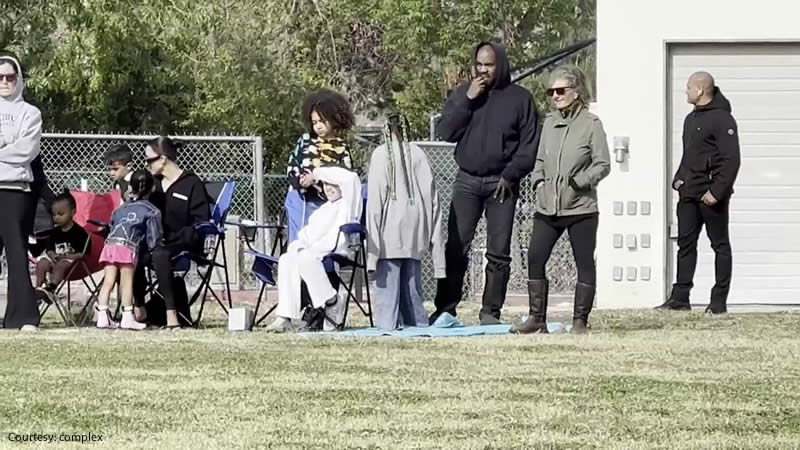 Kim Kardashian and Kanye West were spotted out together on the sidelines of their son’s soccer game over the weekend, which we hope is a sign of better things to come. As they cheered for Saint West and his team, Kim and Kanye appeared to be far more friendly than they have been in recent months. Is this a happy co-parenting situation we’re observing?

The estranged couple hasn’t been seen out together in a long time.

While seeing Saint’s team play in Los Angeles, Kanye and Kim were spotted with their daughter North (but their younger children Chicago and Psalm did not appear to be with them). Kim seemed to be having a great time watching her son play, while Kanye seemed to be happy with his son’s performance – the proud papa filmed most of the game.

Kim and Kanye reportedly didn’t talk much during the outing.

According to TMZ, the ex-couple didn’t have much to say to each other while watching the game, despite remaining close.

Given Kanye’s recent public attacks on both Kim and her new boyfriend Pete Davidson, this is a great turn of events.

Kanye’s social media behavior was so severe at one time that he was barred from using his account for an entire day. Perhaps his sabbatical from Instagram allowed him to ponder on the type of relationship he wants to have with his children’s mother in the future.

It probably helped that Pete wasn’t there on the field with them.

Kanye has been lashing out at Pete, including putting a Claymation version of him in one of his new videos (spoiler alert: Claymation Pete doesn’t do well in the clip).

Maybe Kanye was able to focus on his son instead of his heartbreak because Pete wasn’t around.

We really hope this is a sign Kanye has decided to put his kids first.

Divorce is never easy, especially when you have young children to consider, but Kanye has been acting suspiciously since he and Kim separated.

We’re crossing our fingers that his Instagram hiatus served as a reminder to his children about how much attention his answer has gotten in the press and that it also served as a warning that they would eventually see how their father behaved throughout this time. Ye, we’re rooting for you!