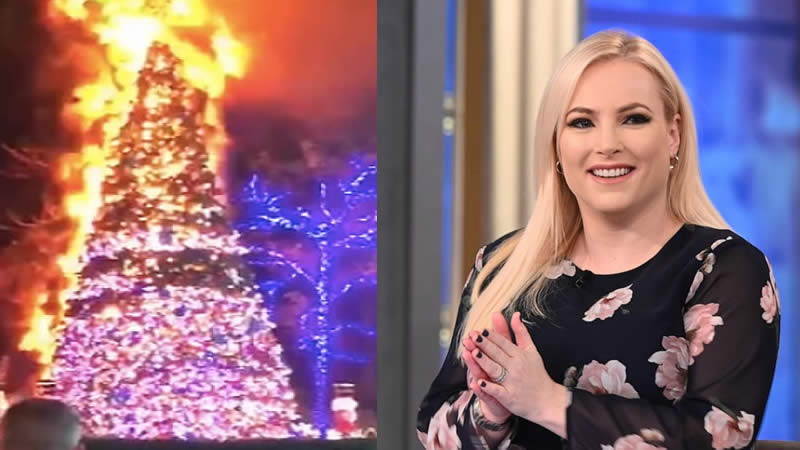 Meghan McCain got a reality check on Wednesday after launching a not-so-hot take on the Fox News Christmas tree that caught on fire.

“I don’t want to hear anything about how radical some of you believe republicans to be when there are lunatics running around New York City setting Fox News Christmas tree on fire,” the conservative pundit wrote.

The New York City Police Department reported a man was seen climbing what the conservative network calls its “All-American Christmas Tree” outside its headquarters in Manhattan’s News Corp building shortly after midnight.

A 49-year-old man, who police said was homeless, was arrested on criminal mischief, arson, and trespassing charges.

McCain deleted her tweet on Wednesday after critics pointed out that she appeared to be conflating the alleged arson of one tree with Republican extremism, which has recently seen one sitting GOP lawmaker post an anime video depicting himself slashing Democrats and another suggests her Muslim colleague is a suicide bomber, in addition to the Jan. 6 insurrection led by a pro-Trump mob.

McCain eventually wrote an entire column about the incident after removing the original tweet, which was published by the Daily Mail.

“The Democrats can gaslight us over rising crime all they like but I really don’t think people want to live in a city where even the Christmas Trees need bodyguards,” the piece was titled.

McCain, who left her co-hosting role on “The View” earlier this year, was known for her controversial and sometimes eye-roll-inducing remarks on the talk show and online.

The following are some of the reactions to her tweet.