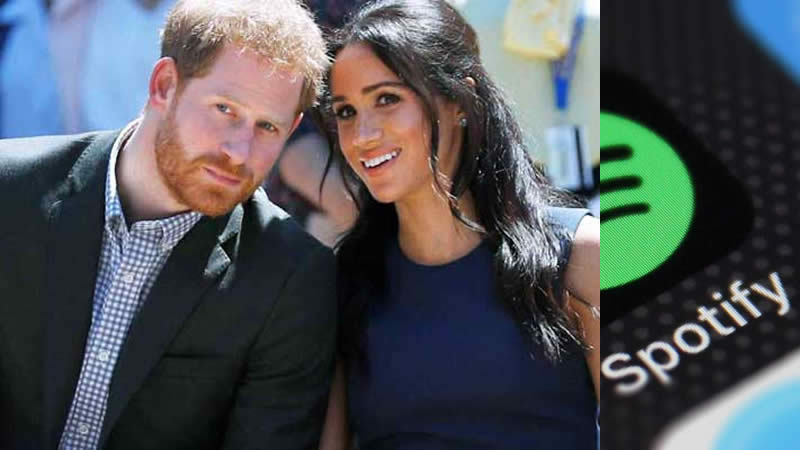 Following the Duke and Duchess of Sussex’s, Neil Young’s, and Joni Mitchell’s concerns about coronavirus misinformation, Spotify has announced new laws that prohibit the broadcast of ‘dangerous’ or ‘deceptive’ content on the platform.

A spokesperson for Prince Harry and Meghan Markle’s Archewell organization confirmed that the couple had expressed “concerns to our partners” at Spotify in April, raising the issue of “the all too real consequences of Covid-19 misinformation on its platform.” He stated that Archewell has continued to express “concerns to Spotify” in order to “ensure changes to its platform are made to help address this public health crisis,” adding: ‘We look to Spotify to meet this moment and are committed to continuing our work together.’

The Duke and Duchess of Sussex have previously acted as Campaign Chairs for Global Citizen’s VAX LIVE event, while Harry was also a commissioner for the Aspen Institute’s Commission on Information Disorder, dubbed “an ambitious report on tackling the growing mis- and disinformation problem.” Archewell Audio, Harry and Meghan’s partnership with Spotify, is reported to be worth £18 million. While some praised the couple for speaking out against misinformation on the platform, others questioned why they were continuing to work with the streaming service in light of such concerns.

After concerns escalated in recent weeks, Daniel Ek, Spotify’s billionaire co-founder, and CEO have now confirmed that changes are being implemented on the platform. In a Tweet on 30 January, he writes: ‘There’s been a lot of conversation about information regarding Covid-19 on Spotify. We’ve heard the criticism and we’re implementing changes to help combat misinformation.’ The Tweet links to a page from the Spotify Newsroom, entitled, ‘Spotify’s Platform Rules and Approach to Covid-19’.

In it, Ek states that Spotify acknowledges it has a critical role to play in supporting creator expression while balancing it with the safety of our users and recognizes ‘an obligation to do more to provide balance and access to widely-accepted information from the medical and scientific communities. He goes on to set out three steps Spotify is taking in light of these concerns, explaining that the streaming service is ‘publishing our long-standing Platform Rules’; ‘working to add a content advisory to any podcast episode that includes a discussion about COVID-19’, which will ‘direct listeners to our dedicated Covid-19 Hub, a resource that provides easy access to data-driven facts… as shared by scientists, physicians, academics and public health authorities around the world’; and will soon ‘begin testing ways to highlight our Platform Rules in our creator and publisher tools to… help creators understand their accountability for the content they post.

The announcement comes after criticisms of Spotify’s lack of an overt policy on misinformation (which social media platforms such as Facebook and Twitter have implemented) grew in light of recent content broadcast on the platform. A controversial scientist, Dr. Robert Malone, was interviewed on an episode of The Joe Rogan Experience, the most popular Spotify podcast. Malone, who was recently banned from Twitter for violating the company’s coronavirus misinformation policy, claimed that the American people had been ‘hypnotized’ into following public health advice.

Following the three-hour episode’s December airing, a coalition of several hundred ‘scientists, medical professionals, professors, and science communicators’ came together to sign an open letter to Spotify, cautioning against allowing people on the platform to ‘damage public trust in scientific research and sow doubt in the credibility of data-driven guidance offered by medical professionals.’

Their concerns were shared by a number of celebrities, including Canadian musician Neil Young, who said Spotify could choose between ‘Rogan or Young,’ but not both, and Joni Mitchell, who said she, too, would pull her music from the platform, stating: ‘Irresponsible people are spreading lies that are costing people their lives.

US comedian Joe Rogan, who the Times reports signed an exclusive deal with Spotify in 2020 worth an alleged $100 million, defended two of his recent guests who have shared Covid-19 conspiracy theories as ‘highly credentialed … people [with] an opinion that’s different from the mainstream narrative’. He said, however, that he would ‘try harder to get people with differing opinions on and ‘do my best to make sure I’ve researched these topics’, adding: ‘I want to thank Spotify for being so supportive during this time, and I’m very sorry that this is happening to them and that they’re taking so much from it.’