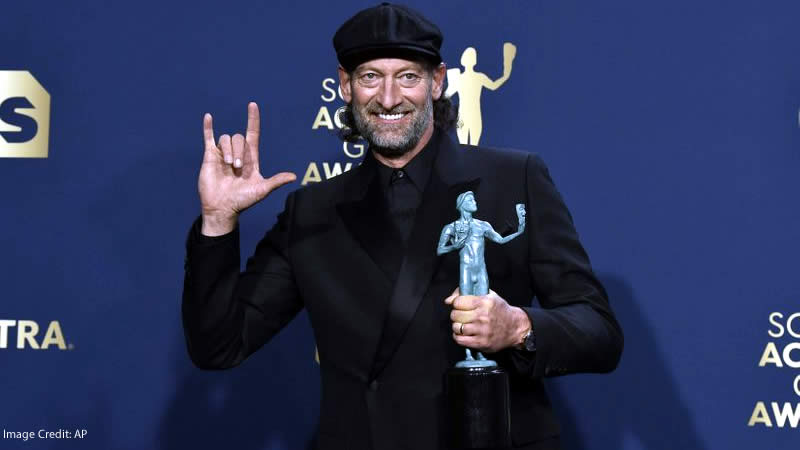 On Sunday night, the actor won the award for Outstanding Performance by a Male Actor in a Supporting Role in a Motion Picture.

Troy Kotsur is a legend in the making.

“I’ve been a [SAG] member since 2001, so now I feel like I’m finally part of the family,” Kotsur told the audience through an ASL interpreter. “I know you all are artists, and I know you all know what it’s like to be a starving actor.

Back then, I used to sleep in my car, I slept in my dressing room backstage, I couch surfed. All of that, you feel me, right? So thank you so much.”

In CODA, Kotsur plays the deaf father of an aspiring singer (Emilia Jones). He was also nominated for Outstanding Motion Picture Cast with his co-stars. From providing closed captioning and ASL interpretation services to “believing in us deaf actors and casting us authentically,” Kotsur thanked distributor Apple TV+ for “all of their support and access.”

As per Ew, the SAG Award win for Kotsur should bode well for his Oscar chances: Daniel Kaluuya won the supporting SAG Award for Judas and the Black Messiah last year, and then went on to win the Academy Award in the same category.

Ben Affleck for The Tender Bar, Bradley Cooper for Licorice Pizza, Jared Leto for House of Gucci, and Kodi Smit-McPhee for The Power of the Dog was among the other nominees.

Continue Reading
You may also like...
Related Topics:SAG Award