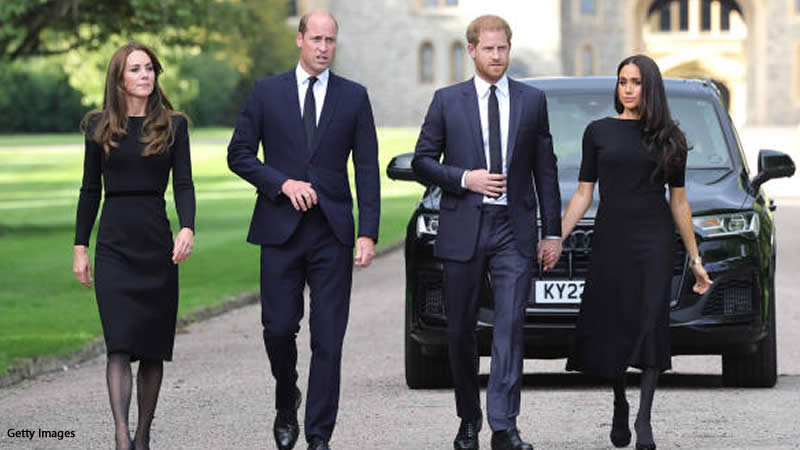 Prince William and Prince Harry met a crowd on September 10, at Windsor Castle and inspected flowers left as tributes to Queen Elizabeth. One royal expert believes they reconciled so that the queen’s death would not be overshadowed by their ongoing dispute.

Camilla Tominey, a royal expert, discussed the brothers’ reunion, telling BBC Breakfast that it’s unclear if William and Harry are reconciling, but that they likely came together to avoid overshadowing the queen’s death.

“So it’s almost one of the most remarkable royal walkabouts in recent memory,” Tominey explained (via Express). “In the sense that we had expected the Prince and Princess of Wales, and then to see Harry and Meghan in the back of the car coming out — the Fab Four reunited.”

She continued, “I suppose looking at those scenes, there’s a degree of awkwardness because everyone’s watching the body language and clearly it took a lot for both brothers to come together [and to] put their differences aside in memory of their grandmother.”

Expert believes there may be reconciliation ahead

Tominey noted that William and Harry coming together provided “comfort” to the public. “There is a sadness around the fact that this duo … these brothers in arms have been on very, very different paths,” she said.

While discussing the chances of the brothers mending their fractured relationship, Tominey said, “I think there is a road to reconciliation ahead.”

She added how Harry’s upcoming memoir could be an obstacle. “It might be a bit rocky and there’s still the prospect of Prince Harry’s autobiography to come, which the palace and royals are worried about,” she explained. “They’re not getting advanced citing of this book that he promises will be as accurate and hopeful truth.”

When host Sally Nugent asked Tominey her thoughts on why the brothers reunited publicly, the expert shared her thoughts.

“I think the narrative was slightly being overshadowed with talk of this ongoing rift. You know, we saw Harry go up to Balmoral alone, reports that Meghan was going to go and then at the last minute didn’t, and I think they’re both conscious that from a PR perspective, the optics around that aren’t good,” Tominey explained.

The expert added, “They don’t want to be overshadowing this 10-day mourning period.”

Tominey also asked, “Who knows what is actually going on inside the family” and wondered what role Meghan and Harry will play in the funeral.

“Is it going to be like the Platinum Jubilee celebrations where there’s a distinction between working and non-working royals, and what will that look like?” she asked. “So I think this was the Prince of Wales extending the invitation. That’s also him living up to his newfound stature as the second in command of this institution.”

She added that the public appearance “was a case of sort of let’s rise above and try and do the right thing.”