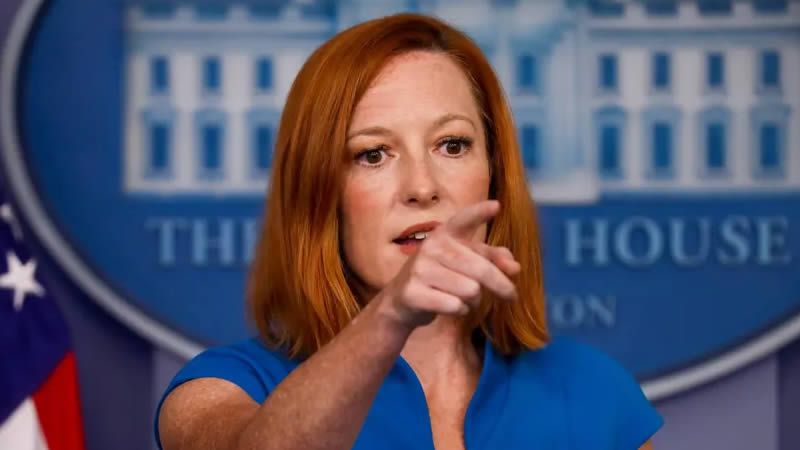 According to Lake Superior State University‘s renowned annual list of banned terms, there should be no more ‘circling back’ to a previous issue in the new year.

Jen Psaki, the White House Press Secretary, has regularly used the work term, a modern replacement to ‘I’ll get back to you on that,’ as she deflected queries from reporters during the last year.

Her usage of the term has spawned a slew of conservative memes and even a rap song documenting all of the times she’s spoken it.

But the term ‘treats colloquy like an ice skating rink as if we must circle back to a prior subject,’ researchers at the Michigan university advised in their most recent list.

And one grammarian says it is ‘the most overused phrase in business, government or other organizations since ‘synergy,” which the university also banned in 2002.

Many of the other words on this year’s list were also banned for being overused, including ‘Wait, what’ and ‘No worries.’

‘Say what you mean and mean what you say,’ LSSU President Rodney S. Hanley said in a statement. ‘Can’t get any easier, or harder, than that.

‘Every year, submitters play hard at suggesting what words and terms to banish by paying close attention to what humanity utters and writes,’ he added.

Since 1976, the Michigan-based college has published a list of banned words and phrases every year, collecting thousands of submissions each time. Every year on New Year’s Eve, it publishes a new list to ‘start the New Year on the right foot, er, tongue.’

Over the past year, more than 1,250 nominations have been submitted for consideration, with submissions coming from Norway, Belgium, England, Scotland, Australia, and Canada, among others.

‘Most people speak through informal discourse,’ said Peter Szatmary, executive director of marketing and communications at LSSU. ‘That’s the distinction nominators far and wide made, and our judges agreed with them.’

Though terms connected to the COVID pandemic dominated last year’s list, LSSU officials say this year’s lineup is more conversational, with only three words relating to the coronavirus on this year’s list.

‘One possible takeaway from all this about the act and art of disclosing something is the more things change, the more things stay the same,’ Szatmary suggested. ‘At the very least, it’s complicated.’

The phrase “Wait, what?” topped this year’s Banished Words list, according to people who nominated it as a failed ‘response to a statement to express astonishment, misunderstanding or disbelief.’

It has been criticized as being overly dramatic.

The phrase ‘No worries,’ which has been used as an inappropriate and often passive-aggressive substitute for ‘You’re Welcome,’ came in second place. The word could also be offensive, according to contributors to the list. ‘If I’m not worried, I don’t want anyone telling me not to worry,’ they wrote. ‘If I am upset, I want to discuss being upset.’

Other words on this year’s list related to current events, including the overused phrase ‘the new normal,’ when describing living through a pandemic, and ‘You’re on mute,’ with one contributor writing: ‘We’re two years into remote working and visiting. It’s time for everyone to figure out where the mute button is.’

As per Peoplealwayswin, ‘Supply chain,’ which dominated the news cycle towards the end of the year as COVID-related staff shortages resulted in a backlog in supplies and goods, was also on the list this year.

But as one nominator wrote: ‘Supply chain issues have become the scapegoat of everything that doesn’t happen or arrive on time and of every shortage.’