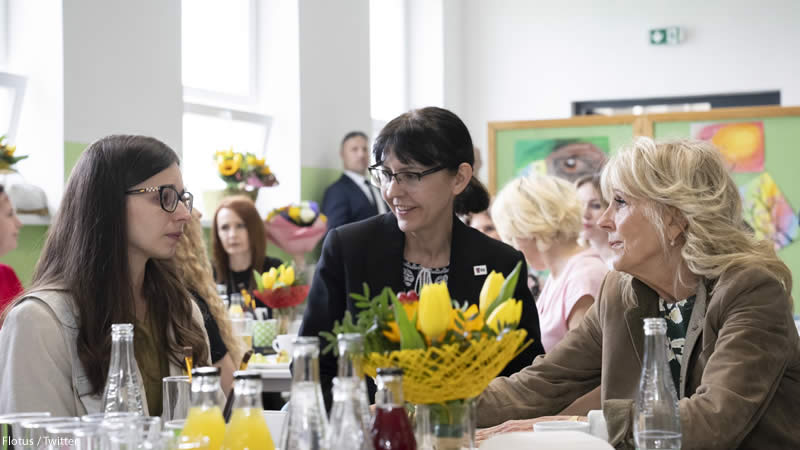 “We stand with you,” Jill Biden said in a message to the families. She also thanked the Romanian government and relief organizations for offering a wide spectrum of humanitarian aid to refugees.

In a tweet, US first lady Jill Biden praised Ukrainian women who have struggled to provide for their children and keep them safe in the midst of the ongoing war in the country.

“Mothers will do anything for their children — and Ukrainian mothers, like Svitlana, continue to be so strong and resilient,” Biden said in an emotional post. “I am grateful to know that the Romanian people have taken these families into their homes and into their hearts,” she added, attaching a photo of a girl clung to her mother as Jill Biden bends down and smiles at them.

Her post was published on Mother’s Day, which is observed on the second Sunday of May every year.

On Saturday, Biden visited with Ukrainian women and children who had fled Russia’s war and had found refuge in Romania. According to the Associated Press, a woman told the US first lady about her hardship of being trapped in a cramped, freezing basement with her terrified 8-year-old daughter.

According to reports, Svitlana Gollyak of Kharkiv, Ukraine, told Biden in her native tongue during the first lady’s tour of a Bucharest public school hosting refugee children that arriving in Romania “was a game change for us.”

Gollyak said her daughter “feels much better here. … No more tears and she adapted very nicely.”

“We stand with you,” Biden said in a message to the families. She also thanked the Romanian government and relief organizations for offering a range of humanitarian aid to refugees.

Visiting the school, Biden – herself a teacher – said: “Really, in a lot of ways, the teachers are the glue that helps these kids deal with their trauma and deal with the emotion and help give them a sense of normalcy.”

As per the Time, she added that she saw signs of hope for families who “felt that there was some structure to their lives and they were getting supplies. They all realized how much money the United States has been giving to Ukraine and to the refugee situation and to Romania to support the refugees.”

Women and children make up the majority of the Ukrainians who have migrated to Romania. Food, shelter, education, health, mental health care, and counseling are among the services provided by the UN, other agencies, and the Romanian government to refugees.

The first lady is on a four-day tour to Romania and Slovakia, both of which share a border with Ukraine, to show solidarity for refugees.

On February 24, Russia declared “special military operations” in Ukraine, forcing millions out of their homes.

Continue Reading
You may also like...
Related Topics:Jill Biden

Kamala Harris Cautions That Women May Lose Right to “Make Decisions about Their Own Bodies” In Graduation Speech at Tennessee State University
Trump blamed Defense Secretary for Failing to Invoke Insurrection Act during BLM Riots: “You betrayed me”