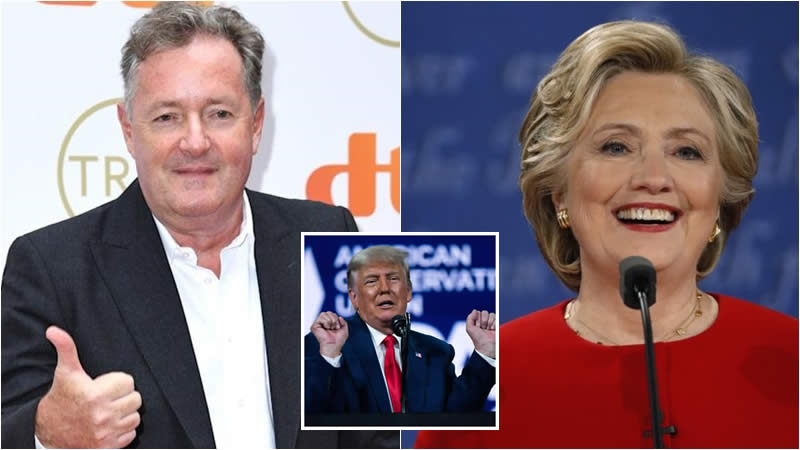 Earlier, an emotional ex-presidential candidate Hillary Clinton almost turned on the waterworks while reading her would-be 2016 victory address as president-elect as she shared part of her speech on NBC’s new Masterclass streaming platform.

Piers Morgan, the anchor of Good Morning Britain, urged Hillary Clinton to “let it go” as she broke down while reading what would have been her 2016 victory speech if Donald Trump had not won the presidential election that year.

The TV host took to Twitter to give a brief but harsh criticism to the “cringe-making” twice-failed presidential candidate. When Morgan unveiled the speech she would have given on NBC’s new Masterclass streaming platform, she retweeted an article about Clinton.

Some users commented on Hillary Clinton’s loss in the post’s comments section.

Others, however, advised Piers Morgan to “follow his own advice” and reconsider his “fixation” with criticising Meghan Markle.

Republican Donald Trump’s victory in the 2016 US presidential election surprised many, with pundits’ and pollsters’ predictions and forecasts failing to materialize.

Looking back, Hillary Clinton became emotional while sharing a part of her potential 2016 victory speech on NBC’s new Masterclass streaming platform. The former US secretary of state and first lady noted that she was “going to face one of my most public defeats head-on by sharing with you the speech I had hoped to deliver if I had won the 2016 election.” According to the politician, she “never shared this with anybody and never read this out loud”.

The Democrat admitted that she did not plan a concession speech because, despite “a lot of bumps these last 10 days,” she was certain of defeating Trump. Clinton nearly sobbed when she spoke about wanting to celebrate her victory with her late mother, who died in 2011.

Clinton also discussed her never-delivered speech in an interview with NBC’s Sunday TODAY with Willie Geist, which will air on Sunday.

In 2016, the Democratic nominee was defeated by Republican opponent Donald Trump by a narrow margin in an election marred by several scandals. Some were linked to leaked Democratic National Committee emails, with Clinton and her allies later accusing Trump of having ties to Russia. The subsequent investigation showed that the charges were baseless.