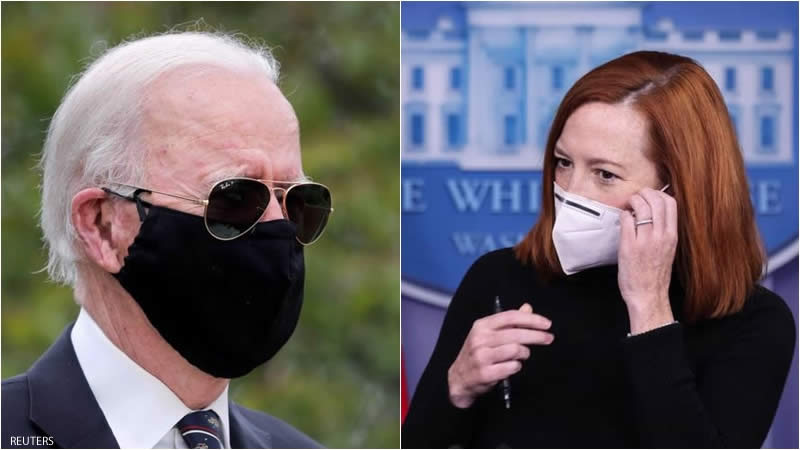 Jen Psaki, the White House press secretary, was snapping at Fox News reporter Peter Doocy for doing his job less than a week after calling him an a**hole.

This time, it was because Doocy dared to challenge the inconsistencies of the Biden administration’s mask mandates, following a federal judge’s decision to overturn the authoritarian COVID theater for airlines and public transportation.

The Biden administration’s statement was almost as opaque as Psaki’s running for cover on the opacity meter.

“You said about this mask ruling out of a federal court in Florida that it’s a ‘disappointing decision,’ and you say you continue to recommend that people wear masks,” Doocy noted during Tuesday’s press briefing.

“Why is it that we can sit here in the White House briefing room with no masks, but people can’t sit in an airplane cabin with no masks?” Doocy asked.

When asked questions that need answers she is unwilling to offer, Psaki quickly devolved into her trademark hostile response.

After Doocy graciously confirmed that he was not a doctor and had never even played one on TV, Psaki responded with further snarky jabs rather than the answers the public deserves.

“But these determinations — remember the masking guidance is — there are — is green, yellow, and red,” she blathered. “We are currently in a green zone in Washington, D.C., so they’re not recommending it.”

The unmasked Psaki, who is double-vaxxed and boosted but recently contracted COVID, continued to provide a long, convoluted non-answer to a brief, direct inquiry.

“Some people can still wear a mask if they want to — many people do — or wear them in meetings or wear them at certain times where you’re going to be around or sitting close to people, or maybe you have an immunocompromised parent or — or friend,” Psaki said.

“And so people make that decision — And there’s — this is based on health considerations and data that the CDC looks at about transmissibility as — as we’ve seen an increase in cases on — on airplanes,” Psaki said, echoing a dubious talking point that even major airline CEOs have abandoned.

Doocy lobbed another reasonable question, this time in response to Psaki’s ramblings about multi-colored zones to heart.

“Would the president support if a flight is leaving from an airport in a green zone, those people don’t have to wear masks?” Doocy pressed.

“Again, Peter, there’s been long a difference from the beginning about people on an airplane and in federal transportation vehicles and situations than where they are in locations, like we here — here continue to be, in Washington, D.C., a green zone,” Psaki responded.

“You’re the press secretary and you know how government works,” McEnany said.

“That’s a snarky answer. The answer is we respect the opinion of the federal judiciary, but that’s not what she said.

As per ijr, McEnany urged the Biden administration to appeal the decision, claiming that it would only serve to emphasize the administration’s dictatorial bent.

“I hope Jen Psaki fights very hard against this ruling,” McEnany said. “I hope President Biden does and I hope they show the true autocrats they are.”

The Biden administration delivered on cue.

“The Department continues to believe that the order requiring masking in the transportation corridor is a valid exercise of the authority Congress has given CDC to protect the public health,” Biden’s Justice Department opined in its statement on appealing the ruling.

“That is an important authority the Department will continue to work to preserve.”