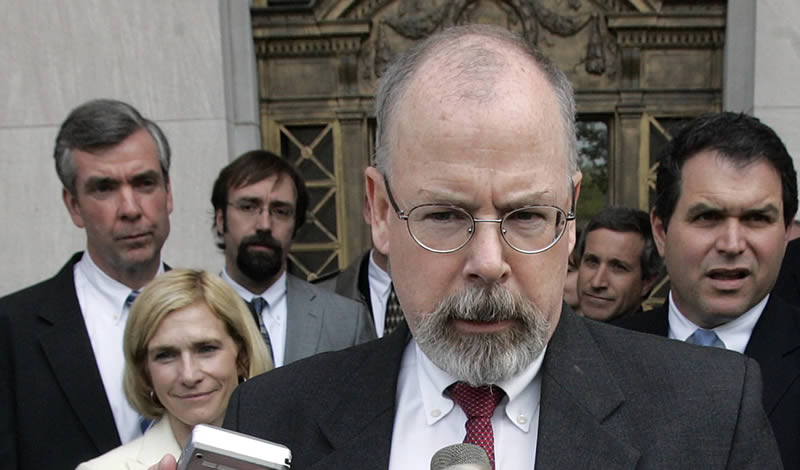 As the investigation into the origins of the FBI’s Russia probe continues, a private lawyer with links to Democrats and Hillary Clinton was accused Thursday by Justice Department Special Counsel John Durham on claims that he gave a false statement to the FBI in 2016.

As per the 27-page indictment, lawyer Michael Sussmann met with the FBI’s then-general counsel in September 2016 to convey information that could have suggested a covert communications route between the Trump Organization and a Russian-based bank.

According to prosecutors, Sussmann told the FBI officer that he wasn’t submitting the claims on behalf of any client. However, according to the indictment, “Sussmann assembled and conveyed the allegations to the FBI on behalf of at least two clients, including a U.S. technology executive and the Clinton presidential campaign.”

The indictment indicates that Durham is pursuing a legal theory that Democratic operatives knowingly provided information to the Federal Bureau of Investigation in order to harm Donald Trump’s presidential campaign at the time.
Conservatives’ political concerns that Trump was the object of a scheme to link him to Russia are likely to be fueled by the indictment. Trump and his associates have made unsupported claims that FBI officials were involved in a plot to damage his candidacy and presidency. The FBI, according to Durham’s indictment, was the victim of a crime and misinformation.

“Michael Sussmann was indicted today because of politics, not facts,” his lawyers, Sean Berkowitz and Michael Bosworth with the law firm Latham and Watkins LLP, said in a statement. “The special counsel appears to be using this indictment to advance a conspiracy theory he has chosen not to actually charge.”

“At its core,” they added, “the special counsel is bringing a false statement charge based on an oral statement allegedly made five years ago to a single witness that is unrecorded and unobserved by anyone else.”

Sussmann worked as a partner in the Washington office in the law firm Perkins Coie. The firm announced its resignation on Thursday evening.

According to the indictment, the FBI investigated reports that a computer service at the Trump Organization was connecting with Alfa-Bank in Russia and “ultimately determined that there was insufficient evidence to support the allegations.”

Durham, who was then the United States Attorney in Connecticut, was appointed to the special counsel position in April 2019 to investigate whether the FBI or intelligence officials committed crimes while investigating whether anyone connected to Trump’s 2016 presidential campaign conspired with Russia to interfere in that year’s election. Durham was named special counsel in October 2020 by then-Attorney General William Barr, allowing his investigation to continue into the Biden administration.

Trump and his conservative supporters have often claimed without proof that a cabal of “deep state” figures unlawfully spied on his 2016 campaign and attempted to harm his administration after he was elected.

Despite their hopes that the Durham probe will reveal scandals to back up their claims, frustration has developed as a result of the special counsel’s office’s silence and lack of new developments.

“Where’s Durham?” Trump asked in a statement in March, six months after losing the 2020 election to Joe Biden. “Is he a living, breathing human being? Will there ever be a Durham report?”

As per Time, Durham’s inquiry has lasted longer than Special Counsel Robert Mueller’s investigation, which took over the original Russia interference probe in May 2017 and finished it in March 2019. The value of Durham’s investigation and whether it should be shut down are still being debated by critics.

More than two years in, Durham has gotten one guilty plea from a former FBI lawyer who admitted to falsifying an email in order to renew a secret warrant to spy on Carter Page, a former Trump campaign aide. Kevin Clinesmith, the lawyer, stated that he modified the email to wrongly state that Page was not a CIA source. Last August, he admitted to falsifying a document.

By comparison, the Mueller probe resulted in 34 indictments, the conviction of a Trump campaign manager, Paul Manafort, for unrelated financial crimes, and a guilty plea from Michael Flynn, Trump’s first national security advisor, for lying to the FBI. Before leaving office, Trump pardoned Manafort and Flynn late last year.

Mueller’s investigation uncovered a major criminal conspiracy by Russian operatives to meddle in the 2016 election, and he documented almost a dozen examples of probable obstruction of justice by Trump.