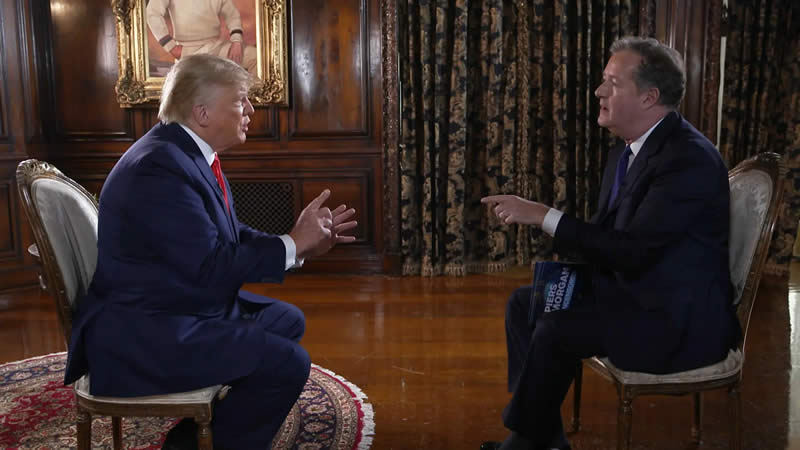 After walking out of Piers Morgan’s new talk show, Donald Trump has spoken out.

It’s only natural that Morgan’s new show Piers Morgan Uncensored should not only have former US President Donald Trump as its first guest but also see the 75-year-old storm out, following his acrimonious leave from Good Morning Britain.

Trump has issued a statement in response to the shocking interview after the preview footage was posted, characterizing him as a ‘former president in denial.’

Trump accused Morgan of attempting to ‘unlawfully and deceptively edit his long and tedious interview’ with him, branding him as “like the rest of Fake News Media.”

He said in a statement released on 20 April: “He wanted to make it look like I walked out on the interview when my time limit of 20 minutes went over by an hour.

“The good news is that the interview was taped by us as a means of keeping him honest.”

As per The Guardian, Trump then went on to say that Morgan was ‘a fool if he truly believed those results’ of the 2020 Election Fraud.

“The evidence is massive and irrefutable (check out Truth the Vote and the Dinesh D’Souza documentary, which will all be coming out soon),” Trump stated.

Morgan’s denial of Joe Biden’s victory in the 2020 elections comes after a federal judge found that the former president ‘more likely than not’ tried to illegally obstruct Congress on January 6, 2021, in an attempt to overturn the results.

Morgan can be heard saying in the preview footage that he is a “very honest man” and “much more honest” than Morgan.

According to Morgan, when the situation became heated, Trump ‘abruptly jumped to his feet and requested that the cameras be turned off before exiting the room, later reportedly calling the presenter a ‘scumbag.’

In his statement, Trump has since called out to fans and followers who ‘want to make Piers look bad [to] compare his video promo and how it was doctored to the real thing.’

The former president concluded: “Hopefully they will now be doing some big changes to their final product.

“It just shows, however, what I have to deal with in the Fake News Media. He went out of his way to deceptively editing an interview and got caught. That is a big story isn’t it?”

Morgan has since responded to the statement, calling the interview ‘great’ and thanking Trump for his time.

“Sorry you got so annoyed that I don’t believe the 2020 election was rigged or stolen from you, but as I said, where’s your proof? If you have it, show us – or accept the result and move on.”