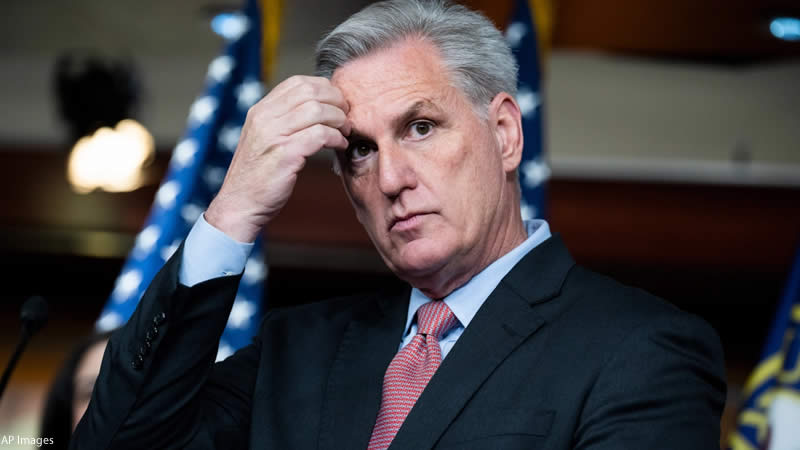 House Minority Leader Kevin McCarthy said Russia “probably” would not have invaded Ukraine if the US had sent aid sooner, blaming the Biden administration despite condoning Trump’s decision to withhold aid from the country in 2019.

“This is going to get stronger and rougher and what really needs to happen is, Ukraine is not asking for American men and women to fight, all they’re asking for is the weapons to defend themselves,” McCarthy said in an interview with Fox News Sunday: “If we would have taken those actions earlier instead of waiting till after Russia invaded, they probably never would’ve invaded had we done that sooner.”

According to MSNBC, McCarthy was a staunch supporter of then-President Donald Trump during his first impeachment proceedings in 2019, when Trump was accused of withholding military aid from Ukraine in order to coerce the country into investigating allegations of corruption involving Joe Biden and his son, Hunter.

McCarthy defended Trump in 2019 by saying, “Nothing in that phone call is impeachable,” McCarthy went on to defend the former president’s decision to withhold aid from Ukraine several times before changing his tune this week.

“Ukraine was craving the ability to defend themselves,” McCarthy said on Sunday. “Had we moved the weapons to Ukraine earlier, that they could defend themselves, it would have saved thousands of lives and probably the decision of Putin not to enter.”

McCarthy did not respond to Insider’s request for comment right away.

Rep. Upton of the Republican Party criticizes the ‘MTG Element,’ claims they make it ‘hard’ to govern
Pelosi Drags Latinos Under the Bus in Battleground District