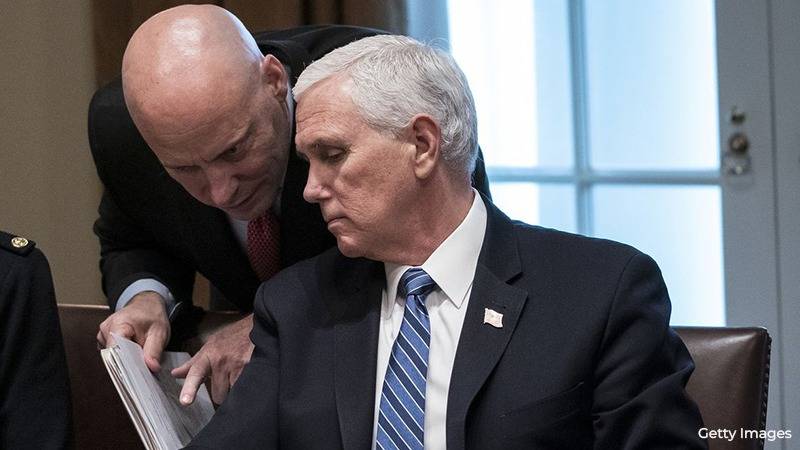 Marc Short and Greg Jacob can provide firsthand accounts of Trump’s attempt to overturn the election and nearly get Mike Pence killed.

Mike Pence is among those who have the most detailed knowledge of Donald Trump’s plan to rig the election and the ensuing revolt. The 45th president spent most of January 6, 2021, making his vice president the target of an irate, armed mob that appeared to want him killed, in addition to repeatedly pressuring the then V.P. to block the certification of Joe Biden’s electoral victory—by reportedly calling the evangelical Christian a “pussy” and threatening to end their friendship if Pence didn’t follow through.

At the “Stop the Steal” rally that preceded the attack on the Capitol, then president Trump told the angry crowd of supporters—some of whom he’d been informed had weapons—“I hope Mike is going to do the right thing. I hope so. I hope so”; “All Vice President Pence has to do is send it back to the states to recertify and we become president and you are the happiest people”; “Mike Pence is going to have to come through for us, and if he doesn’t, that will be a sad day for our country because you’re sworn to uphold our Constitution”; and “Mike Pence, I hope you’re going to stand up for the good of our Constitution and for the good of our country.

And if you’re not, I’m going to be very disappointed in you. I will tell you right now. I’m not hearing good stories.” Later, when the violence at the Capitol was so bad that the V.P.’s Secret Service agents feared they wouldn’t make it home, Trump tweeted that Pence “didn’t have the courage to do what should have been done.” Notified his supporters were chanting “Hang Mike Pence,” the president apparently told his chief of staff that the V.P. deserved it.

Unfortunately for the nation, Pence curiously doesn’t seem interested in telling the January 6 committee or the Justice Department what he knows; this is likely done in an effort to maintain his reputation with the MAGA movement should he decide to run for office again in 2024. But a few of his former aides appear happy to do just that, which is a turn of events that probably isn’t good for the former guy!

On Monday, Marc Short, Pence’s former chief of staff, confirmed to ABC News that he’d appeared before a federal grand jury investigating the attack on the Capitol. (According to The Wall Street Journal, that appearance occurred last week.) Speaking to ABC News reporter Linsey Davis, Short said Monday that he couldn’t say much but that “having the Capitol ransacked the way that it was, I think did present liability and danger.”

He added: “And I think the Secret Service did a phenomenal job that day. I think that the bigger risk, and despite the way perhaps it was characterized in the hearings last week, candidly, is that if the mob had gotten closer to the vice president, I do think there would have been a massacre in the Capitol that day.” In other words, he believes Trump’s followers intended to kill the vice president. Which most would agree is pretty bad!

Also at the meeting was Pence’s chief legal counsel, Greg Jacob, who also recently appeared before the grand jury—and told the January 6 committee: “During that meeting on the fourth, I think I raised the problem that both of Mr. Eastman’s proposals would violate several provisions of the Electoral Count Act. Mr. Eastman acknowledged that that was the case, that even what he viewed as the more politically palatable option would violate several provisions.” (A lawyer for Eastman did not respond to the Journal’s request for comment.

In March a federal judge wrote that Eastman and Trump “likely” committed a crime while trying to overturn the election, saying that “the illegality of the plan was obvious.”) Short was present at a crucial meeting in the Oval Office on January 4, 2021, during which right-wing attorney John Eastman, a.k.a. one of Trump’s conspirators, pressured Pence to either suspend the Electoral College certification and ask willing state legislatures to recheck their results or simply reject Biden’s electoral vote. Short had knowledge of the threat to Pence’s life on January 6 because he was at the Capitol with the V.P. at the time. In that meeting, Eastman allegedly admitted knowing his ideas were unlawful but asked Pence to support them anyway while Trump was present.

Former prosecutors told the Journal that Jacob’s testimony “could help prosecutors show that Mr. Eastman knew his plan wouldn’t withstand legal scrutiny but pursued it anyway.” As CNN reported in February, the January 6 panel had “long considered Jacob a potential fact-witness in [its] probe,” but his firsthand accounts became even more significant after it was revealed by The Washington Post that Eastman, advising Trump at the time, sent Jacob an email while the Capitol was being attacked in which he blamed Pence for causing the violence.

As for Short, following the news of his cooperation with congressional investigators last year, Elie Honig, former assistant U.S. attorney for the Southern District of New York, told CNN’s Erin Burnett: “Short could really be a pivotal witness here because here’s what we know about him—he’s completely loyal to Mike Pence. He is importantly not loyal, necessarily, to Donald Trump. He’s spoken publicly, critically, about Donald Trump for his role on January 6.” Short can also offer details on Trump reportedly banning him from the West Wing following the riot.

And he is presumably happy to tell a grand jury about a recent report in The New York Times detailing how, fearing what Trump was capable of, Short placed a call to Jared Kushner in hopes that the then first son-in-law could talk some sense into Trump. “Look, can you help us with this?” Short asked. Kushner’s reported reply? “I’m too busy working on Middle East peace right now, Marc.”

So yeah, if Trump were smart, he’d be somewhat concerned about all of this. Of course, he’s not, but he should be.