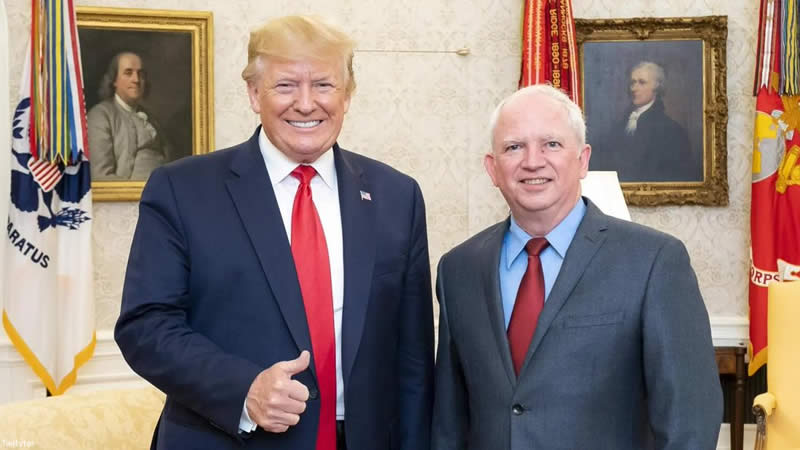 Despite the fact that the scheme was in violation of the Electoral Count Act, John Eastman persuaded Mike Pence to go ahead with it regardless.

According to an email discussion concerning the probable conspiracy, interrupting the certification of Joe Biden’s election win on 6 January last year as part of the attempt to re-elect Donald Trump was recognized to be illegal by at least one of the former president’s lawyers.

The former Trump lawyer John Eastman – who helped coordinate the scheme from the Trump “war room” at the Willard Hotel in Washington – conceded in an email to counsel for then vice-president Mike Pence, Greg Jacob, that the plan was a violation of the Electoral Count Act.

However, Eastman urged Pence to go forward with the scheme anyway, persuading the former vice president’s counsel to accept it on the grounds that it was simply a “minor violation” of the statute governing the certification process.

The revelation that the method was illegal undercuts assertions made by Eastman and the Willard war room team that there was no illegality in asking Pence to postpone the certification until after the 6th of January — one of the strategies they used to re-elect Trump.

It also raises the possibility that other members of the Willard war room, such as Trump’s former attorney Rudy Giuliani and Trump’s former strategist Steve Bannon, were aware of the plan to postpone or prevent the certification was unlawful from the start.

The proposal to adjourn the joint session was one of several options detailed by Eastman in a controversial document addressed to Trump, Pence, and key advisers last year, outlining how the former vice president may try to alter the 2020 election results unilaterally.

As per The Guardian, the decision to postpone the joint session until after the 6th of January was made to give Trump and his team more time to persuade state legislatures to send Trump slates of electors to Congress, claiming that the Biden slates were illegal due to alleged election fraud.

The email exchange, which was revealed in court filings by the select committee last week, shows Eastman attempting to aid Trump by using the fact that the Electoral Count Act was not strictly followed in the aftermath of the Capitol attack.

“The Senate and House have both violated the Electoral Count Act this evening – they debated the Arizona objections for more than two hours. Violation of 3 USC 17,” Eastman wrote to Jacob in his 9.44 pm email, referring to the statute in the US criminal code.

However, Eastman asserted in the second portion of his email that because the statute had already been broken in minor ways – delays of only a few hours at most – Pence should have no issue committing “one more minor violation and adjourn for 10 days”.

That admission is key because it shows Eastman was aware of the illegal nature of the attempt to postpone Biden’s certification, which the select committee believes strengthens its argument that he was involved in a conspiracy to defraud the United States and obstruct Congress.

On Tuesday, the House counsel, Douglas Letter, testified in federal court on behalf of the select committee, citing Eastman’s admission as evidence that what he was recommending violated both the Electoral Count Act statute and the constitution.

The letter also said of Eastman’s request of Pence: “It was so minor it could have changed the entire course of our democracy. It could have meant the popularly elected president could have been thwarted from taking office. That was what Dr. Eastman was urging.”

However, if Eastman knew the plot was illegal, it increases the possibility that Giuliani knew it was illegal when he called Republican senator Tommy Tuberville after the Capitol attack and asked him to complain about Biden’s victories.

Giuliani urged Tuberville to object to 10 states Biden won after Congress reconvened at 8 p.m., a procedure that would have taken 15 hours and dragged the joint session into the next day, according to a voicemail recorded at 7 p.m. that evening and published by the Dispatch.

“The only strategy we can follow is to object to numerous states and raise issues so that we get ourselves into tomorrow – ideally until the end of tomorrow,” Giuliani said.

Eastman made the statement in a series of emails with Jacob included in filings by the select committee challenging Eastman’s argument that more than a hundred communications required by the panel are protected by attorney-client privilege and should be kept secret.

However, according to the submissions, the select committee should be allowed to conduct an in-camera review of the data to determine whether the crime-fraud exemption applied, saying that they appeared to prove Eastman was involved in criminal conspiracy and common law fraud.

After the hearing on Tuesday, the judge in the case ruled in the panel’s favor, allowing a review of about a hundred emails to assess whether the documents were subject to privilege, though he did not comment on whether Eastman might have engaged in criminal activity.

This article originally appeared in The Guardian and has been updated.

Psaki and DeSantis official clash over a Covid vaccine recommendation for healthy children: “Absolutely not. … We know the science”
British Residents Who Take In Ukrainian Refugees into Their Homes Will Receive Large Monthly Payment