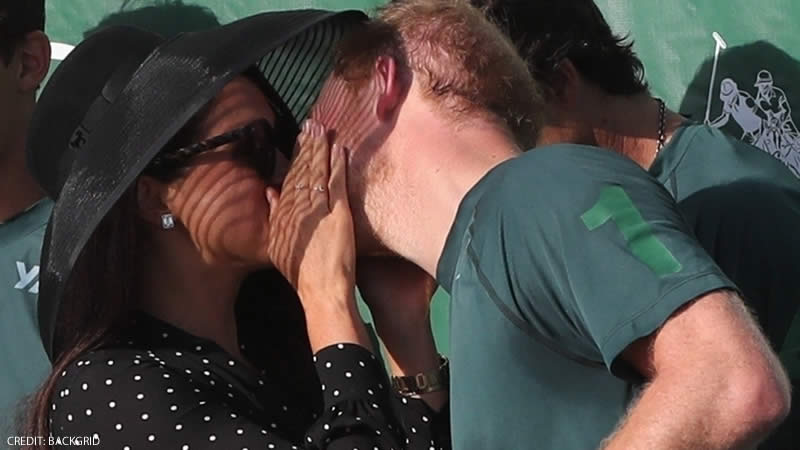 After Prince Harry won a polo tournament in Santa Barbara, California, Meghan Markle congratulated him with a kiss.

Meghan Markle attended a polo match with her husband Prince Harry in Santa Barbara, California on Sunday. With a beautiful moment at the ceremony, the Duke and Duchess of Sussex made their fans go aww.

Following his participation in the match at the Santa Barbara Polo & Racquet Club, the “Suits” alum was seen caressing the renegade royal’s cheek and planting a smooch on his lips.

After Harry won the game and lifted the trophy, Meghan kissed him. The internet has been flooded with photographs and videos from the event.

After Harry’s team won the game, the pair posed for photos and were all smiles. Meghan’s wardrobe choice for the ceremony was significant, in addition to their public demonstration of affection.

She wore a skirt and polka-dot top to the match and looked stunning. She was dressed in a black blouse with white polka dots all over it. She wore it with a knee-length white skirt.

She accessorized her outfit with a black waist belt and a statement black hat. She completed her look with a pair of black heels.

Princess Diana wore a black and white polka-dot dress to Prince Charles’ polo match in 1985, and Markle appeared to be channeling her.

Charles and Diana notoriously exchanged a cold, emotionless peck at the time, just four years after their wedding, amid suspicions that he was cheating with his now-wife, Camilla Parker Bowles.

Her look was completed by bold red lips, oversized sunglasses, and open hair.

In May 2018, Meghan Markle and Prince Harry were wedded. Archie, their son, and Lilibet, their daughter, are their two kids. The pair left their royal duties and moved to Los Angeles.