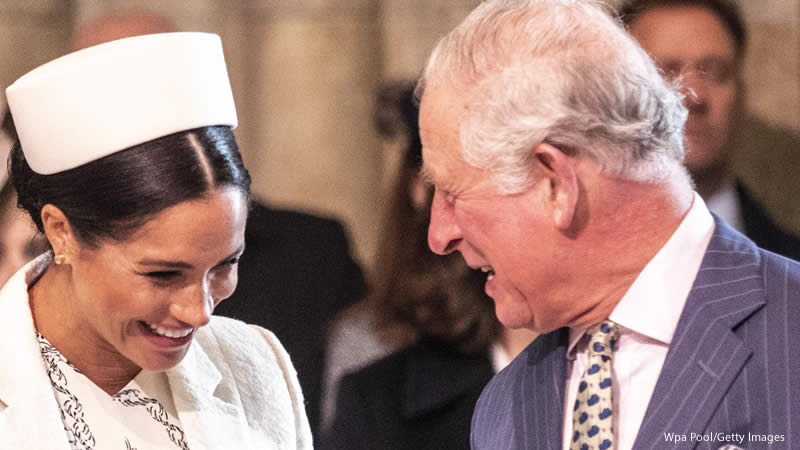 According to a royal author, Meghan Markle‘s response to Prince Charles’ offer to walk her down the aisle stunned Prince Charles.

After Thomas Markle’s father pulled out of the royal wedding, the Prince of Wales offered to walk his daughter down the aisle. According to royal biographer Robert Hardman, Meghan’s response was “not quite what he was expecting.”
Mr. Hardman said Meghan was “determined to make a grand entrance on her own” in his new book Queen Of Our Times: The Life Of Elizabeth II, which was serialized in the Daily Mail.

The royal author said: “Feeling for his future daughter-in-law, the Prince of Wales offered to step in, saying he would be honored to escort Meghan up the aisle of St George’s Chapel to the altar.

“The reply, according to one friend, was not quite what he was expecting: ‘Can we meet halfway?’

“Here was an indicator that this was no blushing bride, but a confident, independent woman determined to make a grand entrance on her own.”

The Duchess of Sussex has been estranged from her father since he declined to walk her down the aisle following a row over staged paparazzi images that threatened to overshadow the wedding.

He also had heart surgery around the time of the royal wedding, according to reports.

Mr. Markle claimed in December 2018 that Meghan had “ghosted” him since marrying Harry.

While speaking to ITV’s Good Morning Britain, he said: “I love you very much, you’re my daughter and I would really like to hear from you.

“Whatever differences we have, we should be able to work them out.”

On the controversy over staged paparazzi photos, Mr. Markle added: “For that incident, I’ve apologized 100 times – I don’t feel that’s worthy of being shunned or ghosted, that’s ridiculous.”

Following their departure from royal duties, the Duke and Duchess of Sussex have relocated to the United States.

In January 2020, the couple declared their intention to quit as working royals, and in March 2020, they completed their final engagements.

They committed to a 12-month review of the arrangements as part of the Megxit agreement.

As per Daily Mail, Mr. Hardman claims in his new book that the Queen was not anticipating that the Duke and Sussex would return to royal duties.

He said: “The Palace also revealed that the Queen had insisted on a review of the situation after 12 months, just in case the couple might be having second thoughts.

“Privately, she wasn’t expecting them to.

“Asked by one well-meaning visitor if she expected them to resume royal life, the Queen replied firmly: ‘Of course not. They took the dogs.’”