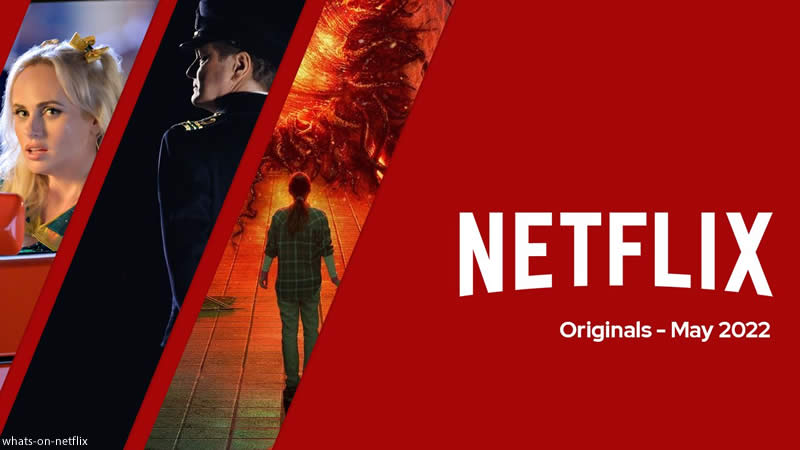 In May 2022, Netflix is adding a Swedish drama miniseries, a war drama movie, new seasons of Stranger Things and Love, Death & Robots, and more.

Netflix will add a Swedish TV series about a renowned criminal, a British war drama film, the third season of a popular animated anthology series, the highly anticipated fourth season of a sci-fi horror TV series, and much more to its lineup in May 2022.

Cinemas around the world are open and operating again, but as studios continue to release all of the films that were delayed due to the coronavirus pandemic, streaming services have remained strong.

Many of these platforms continue to host films that were previously only available in theatres, or they are shortening the time between theatrical and home distribution, allowing audiences to catch up quickly. Others, such as Netflix, have a long list of licensed and original content for months to come and continue to add new content from both branches every month.

April saw the arrival of the coming-of-age animated movie Apollo 10 ½: A Space Age Childhood, the comedy movies The Bubble and Metal Lords, the horror movie Choose or Die, the documentaries Conversations with a Killer: The John Wayne Gacy Tapes and The Mystery of Marilyn Monroe: The Unheard Tapes, new seasons of Elite and Russian Doll, and the final episodes of Grace and Frankie and Ozark. When it comes to licensed content, May will see a variety of titles, such as Tim Burton’s Corpse Bride, the rom-com Crazy, Stupid, Love, the action-thriller Dirty Harry, and the comedies Jackass: The Movie, Jackass 2.5, Jackass 3.5, and the highly-awaited Jackass 4.5.

Netflix will premiere a Swedish TV series starring Bill Skarsgard, a British war film based on a book, a new batch of Love, Death, and Robots episodes, the return of Hawkins and the Upside Down, and much more in terms of original material. Here’s what’s coming to Netflix in May 2022.

Octonauts: Above & Beyond: Season 2 — NETFLIX FAMILY

The story of ordinary people who have the courage to do extraordinary things is told in this fascinating four-part documentary series. Meltdown examines the near-disaster at the Three Mile Island nuclear power station in Pennsylvania through the eyes of Richard Parks, the plant’s top engineer and whistleblower, as well as the communities affected. Dramatic reenactments, historical footage, never-before-seen home film, and in-depth interviews engage viewers in the United States’ greatest nuclear disaster.

Despite multiple counts of drug trafficking, attempted murder, assault, theft, and dozens of bank robberies, Clark follows the man behind the expression “The Stockholm Syndrome” on his life journey as he fooled the entire country of Sweden into falling in love with him. The series, starring Bill Skaragrd and based on the truths and lies disclosed in Clark Olofsson’s autobiography and directed by Jonas Kerlund, gives a fictional take on one of the most controversial people in contemporary Swedish history.

What if, since the Black Plague in 1347, a secret society of five men has been working to influence world events for the greater good? As the new series begins, one unusual Canadian journalist is thrown into a mission to unearth the truth and possibly save the world. Keep in mind that the Pentaverate must never be exposed.

The film features lush photography, sweeping vistas, and adorable animals in their natural environments. The ultimate adventure awaits them as they courageously make their way to adulthood.

Along for the Ride — NETFLIX FILM

It’s Auden’s last summer before starting college, and she’ll be spending it at beautiful Colby Beach. While other teenagers are out having fun in the sun, Auden spends her time roaming the streets after everyone else has gone to bed. When she meets Eli, a charming and mysterious fellow insomniac, everything changes. Eli pushes Auden on a journey to fulfill all of her childhood dreams during their night adventures. As they begin to show one other how to live life to the fullest, their connection forces them to confront why they’ve been satisfied living in the shadows. Emma Pasarow, Belmont Cameli, Kate Bosworth, Dermot Mulroney, and Andie MacDowell feature in this film based on Sarah Dessen’s novel.

Animated. messy and naughty Marmaduke is a good guy with a big heart, but he can’t seem to stay out of trouble. Is he good enough to compete in the fancy world of dog shows?

The Sound of Magic — NETFLIX SERIES

Yoon Ah-Yi, a young girl who was allowed to grow up too fast, meets Rieul, a mysterious magician who, despite his age, wants to remain a kid.

François Monge (Laurent Lafitte) and Ousmane Diakité (Omar Sy) are two cops with very different styles, backgrounds, and careers. The odd pair reunites for a new investigation that takes them all around France. What appears to be a routine drug deal turns into a large-scale criminal case filled with danger and unexpected comedy.

Are you happy? With this question, Zoa and four other young, attractive, and social media-savvy lads and girls are invited to the most exclusive party in history, held on a secret island and hosted by a new drink company.

What begins as an exciting journey soon turns into the trip of a lifetime. But all is not as it seems in paradise… Welcome to Eden.

When Verónica disappears, her sister embarks on a race against time to find her. Cecilia will have to battle the authorities’ indifference, society’s biases, and media harassment in her search.

The Allies are determined to break Hitler’s grip on occupied Europe, so they plan an all-out assault on Sicily in 1943. However, they face an impossible challenge: how to safeguard a vast invasion force from the possible massacre.

Ewen Montagu (Colin Firth) and Charles Cholmondeley (Matthew Macfadyen), two outstanding intelligence officers, are tasked with devising the most brilliant and improbable disinformation scheme of the war, centered on the most unlikely of secret agents: a dead man.

Operation Mincemeat is the incredible true story of a plan that intended to change the course of the war by defying logic, risking tens of thousands of lives, and putting the creators’ nerves to the test.

Jacoba Ballard, an only child produced by donor sperm, wished for a brother or sister. At-home DNA tests showed that she had not one, but seven half-siblings — a figure that defied fertility medicine’s best practices. As the group set out to find more about their strange family tree, they learned the shocking truth: their parents’ fertility doctor had been artificially inseminating his patients with his own sperm without their knowledge or consent. Ballard and her newfound siblings realize they’ve only scratched the surface of his dark web of deception, and their quest for justice is at the center of this deeply disturbing story about an unimaginable breach of trust.

Don and Grace Bhengu tried a toxic product on a group of street children fifteen years ago. Zinhle Manzini, one of the two survivors, has returned to take retribution. Zinhle transforms into an unseen force that reveals family secrets and leads the Bhengus on a path of destruction, but innocent people are killed in the process, and Zinhle’s own darkness threatens to engulf her. Zinhle must choose between justice and pure, cold revenge.

Mickey Haller (Manuel Garcia-Rulfo) is an iconoclastic optimist who conducts his law firm out of the back seat of his Lincoln, taking on cases big and small all around Los Angeles. The first season of The Lincoln Lawyer is based on The Brass Verdict, the second book in Michael Connelly’s bestselling Lincoln Lawyer series. Neve Campbell, Becki Newton, Jazz Raycole, and Angus Sampson also star.

This feature-length documentary tells the story of two female college students, a group of journalists, and the cybercrime police officers who chased down the “Nth Room”, an online criminal network of sexual exploitation. Crafted from interviews, archives, animation, and reenactments, the film reveals how women and girls were coerced into uploading explicit materials of themselves to Telegram chat rooms, which ringleaders charged fees in cryptocurrency for tens of thousands of users to access. This is the story of one of the most devastating digital crimes that gripped the region, the age of digital anonymity that allowed it to thrive, and the victims who spoke out to help bring it down.

When Lola (Victoria Justice), a hard-charging LA wine firm sales executive, quits her job in the hopes of launching her own wine distribution company, she purchases a plane ticket to rural Australia to pursue her first possible client, Vaughn Family Wines. The Vaughn Family, unfortunately for Lola, is not interested in doing business with a small business. Lola volunteers to fill a vacancy as a farmhand on the Vaughn sheep farm, eager to show herself. Lola doesn’t seem up to the task of fixing fences and herding sheep at first, but she strikes up a bond with the dashing station manager Max (Adam Demos) as he trains her.

Ben in Back
F*ck Love Too — NETFLIX FILM

Five couples have found love in their own way in different locations and situations, but how long will it last this time?
Jackass 4.5

It’s been six months since the Battle of Starcourt, which brought terror and destruction to Hawkins. Struggling with the aftermath, our group of friends is separated for the first time, and navigating the complexities of high school hasn’t made things any easier. In this most vulnerable time, a new and horrifying supernatural threat surfaces, presenting a gruesome mystery that, if solved, might finally put an end to the horrors of the Upside Down.